It’s difficult for many people to approach a stranger’s house and knock on their door. It’s quite another matter if you are knocking on doors and running for public office.

Within minutes, you need to introduce yourself and connect with the person on the other side of the threshold. We call it being face to face—a fundamental form of human communication.

When Assistant Professor Sarah Hernandez, ’14 G’15, of the occupational therapy department decided to run for the school board in her local town, the process of canvassing in the community and meeting strangers was absolutely terrifying. “At first, I had to watch how people did it. And, slowly, I learned to pick up certain cues and how to handle myself in different situations. People were very patient with me. It was a big step when I knocked on that first door.”

Sarah’s success is all the more remarkable because she is neurodiverse: she is on the autism spectrum. Autism Spectrum Disorder (ASD) is a development condition defined by social and communication difficulties and repetitive, inflexible patterns of behavior.

When you first meet Sarah, a mother of three with a friendly and welcoming smile, she appears to be the opposite of society’s profile of being autistic. But appearances can be deceiving. Sarah, along with many other young girls and women, has mastered what is known as “social camouflaging,” or hiding in plain sight. In many ways, this coping technique has led to women of all ages to be misdiagnosed, or in some cases, not diagnosed with autism at all. And that gets to the heart of Sarah’s story:

“I was diagnosed in my thirties, and that is not unusual for women. I knew that I was different somehow, but I couldn’t put my finger on it. There were times that I just had to shut down and not communicate. I was lucky to learn it was a form of autism because most women fly under the radar and never find out. They live in a world of inner turmoil. It’s only recently that researchers are looking at the gender differences in autism. In fact, the criteria for diagnosing ASD are based on data gathered from the studies of boys.”

According to the Centers for Disease Control and Prevention, the disorder is 4.5 times more common in boys than girls. As awareness of autism grows, new protocols are being developed that indicate the gap may not be as wide as once thought. In the meantime, there are discernable shifts in society’s perceptions of autism.

Expanding the Definition of a Diverse Workplace

Sarah, like many others on the spectrum, has learned to live with her autism. She is a role model for her occupational therapy students, sharing her experiences to make them more sensitive to the differences and contributions of the members of her “tribe.”

“I let my students know right up front that I am autistic. And I share my knowledge of the strengths of autism—our ability to think in patterns, to visualize, and to be problem solvers,” she says.

In fact, this skill set is prompting companies and organizations to expand their definitions of a diverse workplace. A recent article in the Harvard Business Review, Neurodiversity as a Competitive Advantage, by Robert Austin and Gary Pisano, reports that the neurodiverse population remains a largely untapped talent pool. With a vast number of IT and IT-related positions going unfilled, HR departments are re-examining their recruitment practices and working environments to accommodate neurodiverse employees. In companies with active neurodiverse hiring programs, such as Hewlett Packard, Microsoft, Ford, and others, they have already realized productivity gains and a high number of innovations. They have found that diversity does deliver.

“I know I am incredibly lucky to be working at Bay Path,” states Sarah. “I am doing what I love, and I can be honest about who I am.”

Sarah’s generosity of spirit does not stop at Bay Path. She and her husband have one biological child, have adopted two children, and are therapeutic foster parents. When one of Sarah’s children experienced difficulties in school because she is darker in complexion, she knew she had to step forward to give voice to her daughter and others. She decided to run for the school board.

“I can hide my disability, but my daughter can’t turn her skin color off. I decided that I needed to stand shoulder to shoulder with others on the spectrum, as well as represent all those who need a spokesperson.”

So, Sarah left her comfort zone and began knocking on doors, participating in debates, and attending meetings. She never hid her autism. And she won.

But her victory wasn’t just for the schoolchildren in her town. Through social media, her election gained broad attention. NBC Hartford did a profile on her, and at a national conference on autism, she shared the stage with former Senator Tom Harkin, who introduced the Americans with Disabilities Act (ADA) into the Senate.

For Sarah, the attention was sometimes hard to believe: “As a person on the spectrum, I believe we live in a world that wasn’t made for us. But we have to keep participating, and we have to work to represent ourselves. I like to say, ‘We have to put our pants on in the morning.’ We just need to show up.”

With advances in the study, research and treatment of autism spectrum disorder (ASD) happening almost daily, we hope the following news and media items will keep you well informed. 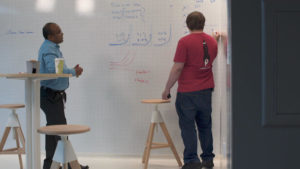 The growing acceptance of autism in the workplace

CBS NEWS | February 11, 2018, 9:09 AM
Twenty-seven-year-old Christopher Pauley thought he had it all figured out when it came to looking for a job. He had a detailed spreadsheet of each and every position he applied for – at least 600. But despite his degree in computer science from California Polytechnic State University, he went two years with barely a nibble. Did he get discouraged? “Oh my gosh, my morale really started to drop towards the end,” he said. “In fact, there were days where I would either hardly fill out any applications at all, or just simply not apply on anything.”